Lower oil prices typically boost global growth, but the recent decline to an 18-year low will likely provide less support than usual. We estimate weak demand was responsible for more than half of drop since the beginning of the year. This is a symptom of sluggish activity, not a cause of future expansion.

Oil is facing a toxic mix of negative shocks to both demand and supply:

A drop in oil prices shifts income from producers like Saudi Arabia and Russia to importers like the euro area and Japan. For the global economy the net effect from this shift is typically positive — consumers spend a higher portion of their energy-bill savings than producers cut outlays.

But the impact depends on the cause of the oil price decline. A demand-driven drop is a reflection of weak activity — it’ll reverse once the economy recovers and won’t provide a permanent boost to growth. But an increase in supply could be longer-lasting and a catalyst for future expansion.

Weak demand accounts for the majority of the oil price fall since the beginning of the year, so the boost to global growth would probably be smaller than the $40-decline suggests. As far as the impact on global growth is concerned, it’s as if crude prices have fallen from $66 per barrel at the beginning of the year to a current level just below $50 — instead of the actual $26 price seen now.

Even the $18 supply-led drop is coming at the same time as the coronavirus threatens to trigger a full-fledged global panic. Its immediate impact could still be negative. Oil producers would take an immediate hit. Oil consumers won’t spend more if they’re under quarantine. The reality of the brutal drop in prices adds to the sense of panicked uncertainty.

Oil prices decline because of either weak demand or higher supply. These two factors affect equities differently, meaning we can use stock price changes as an instrument to separate oil demand shocks from supply. Weak demand due to a slower global economy would lower both oil and equity prices. But a supply boost would reduce oil prices while lifting equities — lower energy costs make corporates more profitable.

If both oil and equities move in the same direction (higher or lower), that would indicate a demand shock. But if they move in opposite directions, that would signal a supply shock.

To separate oil price changes into demand and supply, we do the following: 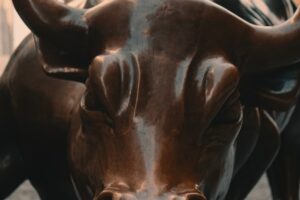